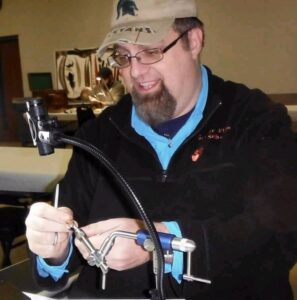 Welcome back everyone to our normal activity meetings once again. I will be taking the helm to kickoff the new Featured Club Tyer season tying the “Red Headed Stepchild” and the “Frenchie.”

I am a production/custom tier from Southeastern Michigan and have operated Grizzly Flies by Schottsie for more than 18 years. I am the founder of “Michigan Bobbin Slingers (fly tyers), on Facebook, a site that is dedicated to the art and craft of Fly Tying. I do “Live Fly Tying” for various pages on Facebook. During my tenure at the MFFC I have contributed “Fly of the Month” articles for over 7 years, and was a contributing author since 2005.  I currently Chair the Guest Tiers for the Midwest Fly Fishing Expo and volunteers for various club functions, including the mem

ber, youth public and Boy Scout schools. Some of my 43 plus original patterns have appeared in various publications. In 2015, two of his patterns were featured in articles in Eastern Fly Fishing Magazine and in 2017 a box of his original flies appeared in Fly Fusion Magazine in the segment End of the Line.

The first fly is called the “Red Headed Stepchild,” by Hogan Brown. This fly takes the place of two general attractor nymphs, the Red Copper John and the Red Headed Prince. It is considered an attractor pattern, with the great fish attracting elements of the red and the flashback. It is considered and accurate silhouette of a mayfly or small stonefly. Hogan uses it as a dropper behind a bigger fly like a stonefly or a caddis pupae, if using a glass bead. If using a tungsten bead, just fish it alone. If you’re going to fish fall Steelhead, try this as a dropper behind your favorite egg pattern.

The second fly will be another all around nymph pattern to be used Steelhead fishing this fall and winter. It is called the “Frenchie” by Lance Egan, and is probably one of my favorite flies to use. The color combination presented tonight, won Egan his first

World Fly Fishing Championship in Portugal in 2006. This fly represents a few various nymph stage insects. Fish this alone or as a dropper. For the championship, Egan used it as a dropper underneath an ant pattern.

So get your bobbins ready to sling and vises ready for some awesome fly tying at our September 22nd Activity Meeting.

Remember I am need of tyers for rest of the year, so if inter

ested contact me at GrizzlyFlies@yahoo.com or at 248-961-4146 either by text or call. Snazzy Flies and Tight Lines. 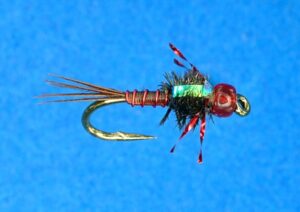 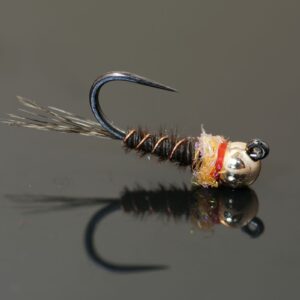