Here we go again.  It is well known (and I make no secret about the fact) the Purple Haze is my standard go-to pattern.  It works everywhere.  I have “hazed” in Michigan, Ohio, Colorado, Montana and even Coyhaique, South America.  My father, always one to test my theories when free flies are involved, has taken the patter to other countries with equal success.  To avoid the boredom of actually tying the pattern the same way, I started working with different materials to see if I could make the pattern easier to tie and still have the same effect.  The results have been mixed.  While the fish, fortunately, rarely care, many of my reject patterns with materials that did not make the cut have been relegated to family (who don’t know better or in all likelihood don’t care) or trees (who have never complained).  The materials I have settled on still resemble the Purple Haze (nothing more than a purple Adams) but allow for quicker tying and a sturdier fly.  My “go to” material is the Puglisi EP (UV) fibers.  They not only create a great visible post, but also form the body of the fly, cutting down on the need for additional body material.

The next pattern is from our second to last Banquet speaker, Phil Rowley.  Phil demonstrated this pattern which I would colloquially call a bead head caddis variant tied on a jig hook.  The jig hook gives the fly a different balance point while the tungsten bead provides weight and action in the water. The pattern does not really imitate anything, but the color, weight and action of the fly make it irresistible to fish.  During a difficult fishing day in Coyhaique, which is pretty much every day, I pretty much gave up and just tied one for because nothing else was working.  The wind was insane, you could literally lift your rod and the wind would carry the line 40 feet in the air (I have video if anyone wants to see this). Dry flies were just not in the cards.  The guide was exasperated going through patterns trying to find something that would work.  On a lark, I pulled out the Pink Hog, tied it on and took a shot at it.  A cast or two later and – fish on… I caught a few more on the same pattern and the guide just couldn’t resist asking what I was using.  I showed him the pattern and he looked exasperated.  He told me that the fly didn’t resemble anything the fish would eat, but hey it worked so let’s keep using it. Who knows why it worked, but it did, and no complaints from me.  And that’s my mantra, it’s not always about matching the hatch.  Sometimes it just experimenting with something that looks edible. 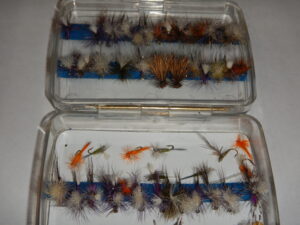